Dell’s Alienware division has come up with an interesting concept of the future known as Nyx which will allow gamers within a single household to play multiple games, simultaneously.

Alienware’s Concept Nyx To Change The Way How You Game In Your House, Allowing You To Simultaneously Run Multiple Games On Any Platform

An R&D project proposed by Alienware’s EIG (Experience Innovation Group), Concept Nyx aims to revolutionize the way you play at your home, whether alone or with your friends. The idea is really simple, to provide gaming access to everyone within your home. For example, imagine yourself on your desktop PC playing some game, your roommates in the living room gaming on their tablets & laptops, and some casually playing some game on their mobile. But then, you plan on going down to your living room and playing the same game that was running on your desktop PC on your 50+ inch TV in a seamless manner. That’s the idea behind Concept Nyx.

But to do this, you’d require a very expensive and powerful local setup. One solution is to go the cloud gaming route but a drawback is usually the latency associated with such platforms as the data needs to travel to you from servers that are really far. While some solutions such as GeForce Now are making things accessible for everyone, the local processing advantage cannot be beaten.

As such, Concept Nyx is to deliver edge computing through the use of high-performance game processing at your home, and since it is being done locally, you don’t have to worry about latency or bandwidth issues. Nyx is proposed to offer multiplayer latency in single-digits (ms) and it will be powerful enough to handle four-game streams simultaneously while supporting smart switching on the various platforms that will be supported by it. 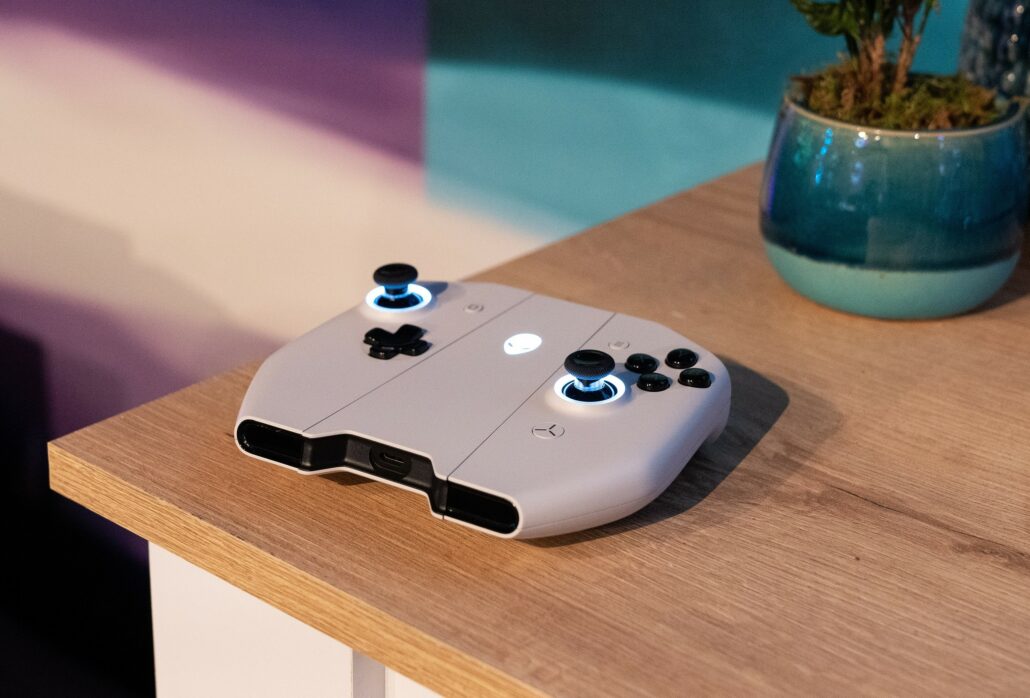 This certainly sounds like a really cool idea & Alienware did show a prototype build of Concept Nyx, featuring a large RGB lit base and a black colored chassis on the top. It looks like a combination of a console and a set-up box. Alienware also showed a handheld controller which looks very futuristic with its white and black color scheme and RGB-lit thumbsticks. It also makes use of a USB Type-C connector to charge. Currently, there are no words on the specifications, pricing, or availability of Nyx but we can expect more information in 2022. Following is the full press release:

It’s one of the most common and frustrating problems – having multiple gamers under one roof competing for access to their favorite titles and totally crushing Wi-Fi bandwidth. Or is it??? 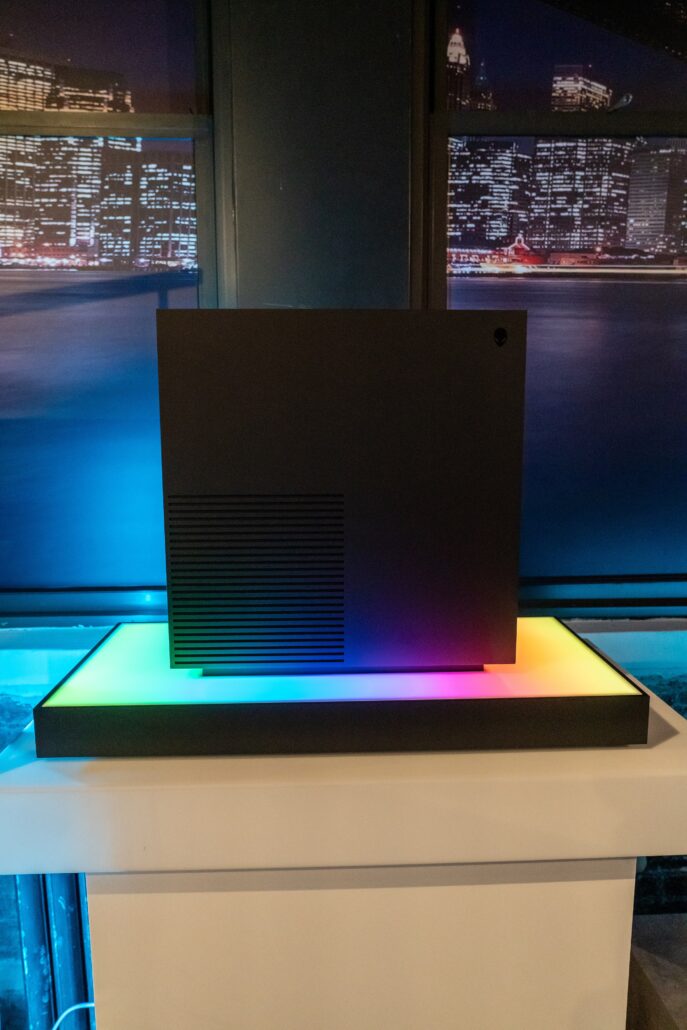 We’re always thinking ahead to the future – near and far – and thinking about the ways we can provide the best gaming experiences out there. Which is why we’re incredibly stoked about potentially solving one of the biggest challenges in PC gaming and changing the game completely: how to simultaneously allow players in a household to easily access their full game library and play on any device, even if they want to change screens during gameplay. A tall order, but Alienware is hurtling towards a solution.

We call it Alienware Concept Nyx.

An R&D project from our consortium of wizards also known as our Experience Innovation Group (EIG), The Concept Nyx solution comes in the wake of other audacious Alienware initiatives that have broken boundaries and elevated the PC gaming experience: from creating our thinnest gaming laptops to date with the Alienware X Series to bold gaming ideas like Concept UFO. Now we’ve done it again, literally breaking the mold of the PC gaming experience with an eye toward the future.

Imagine you’re on your desktop in your bedroom exploring Night City in CyberPunk 2077. Your roommates are on their laptops and tablets in the living room, battling head-to-head in Rocket League. And your cousin is also over, casually building a new world in Minecraft on her cell phone. Now let’s say it’s time to prepare dinner so you head downstairs and pass the controller to one of your roommates – you can quickly switch to your CyberPunk 2077 experience on the 65-inch TV in the living room and let them takeover exactly where you left off, advancing your game while you cook.

That’s the future of gaming! And it’s starting to take shape today. How would it be done, you ask? Alienware Concept Nyx spotlights the role edge computing could play – where high performance game processing could be done in the home and shared across the local network. Because the processing happens locally (versus needing to travel to and from distant servers), it could offer lower latency, greater bandwidth and more responsiveness – ultimately solving some of the performance shortfalls of current alternatives like cloud gaming. This means multiplayer latency could reach single-digit milliseconds to dramatically decrease any lag of modern-day cloud gaming systems. Pretty cool, huh?

It doesn’t stop there either. We have been looking at how to power four game streams simultaneously, smart switching among devices, and drawing from a central library of all your games regardless of where you purchase them. Gaming on Alienware’s Concept Nyx aims to be as effortless as accessing your favorite music, TV shows and movies. Imagine a simple app loaded on each device delivering instant access to all your games for a more seamless gaming experience across devices in the home. Imagine no more fighting with your family or roommates over game time (you can still fight over groceries and laundry). Wouldn’t it be nice to tear down the barricades so that everyone can game on their own terms?

Alienware loves a challenge. We were founded on a challenge, to create a new market for high-end gaming PCs back when none existed. We’re especially excited about this concept because of its uniqueness as an idea and its potential for the gaming industry at large – we could imagine this appealing to not only casual gamers, but the ok-I’ll-have-a-go gamers, next generation gamers – the whole family. Given our sci-fi bona fides, we’re thrilled to boldly go where no brand has gone before.

As we further develop Concept Nyx, we aim to use each step forward to benefit future products and enhance the user experience. We hope you’re as jazzed as we are to embark on this journey, and we look forward to keeping you in the loop.

AllowingcomputingDeviceEdgeGameslocalMultiplePlatformrunSimultaneously
By adminJanuary 3, 2022ComputingLeave a Comment on A Local Edge Computing Platform Allowing Multiple Games To Be Run Simultaneously on Any Device